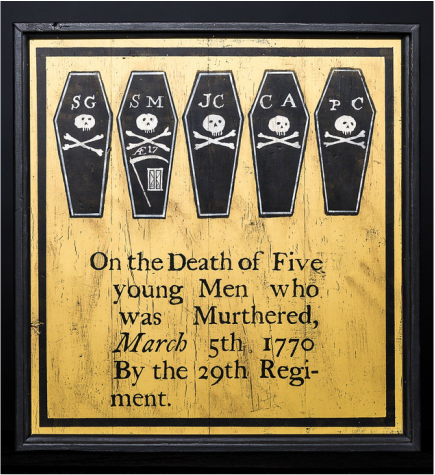 This dramatic engraving was produced by Paul Revere for the Boston Gazette . It served as a propaganda effort, and represented the first five martyrs who died for the American cause. On March 5th, 1770  a private in his majesty's army named Hugh White was on guard duty in front of the Custom House on King Street when an apprentice to a whig maker named Edward Garrick tried to mock his superior officer named Captain-Lieutenant John Goldfinch over an unpaid bill to his master.  Goldfinch didn't engage the boy because his bill had been paid in full.  White immediately challenged this young boy and eventually struck him in the head with his weapon for being disrespectful. "This attracted a larger crowd. As the evening progressed, the crowd around Private White grew larger and more boisterous church bells were rung, which usually signified a fire, bringing more people out. Over fifty Bostonians pressed around White. Runners alerted the nearby barracks and Captain Thomas Preston. Preston dispatched a noncommissioned officer and six privates of the 29th Regiment, with fixed bayonets, to relive White. When they reached Private White on the custom house stairs, the soldiers loaded their muskets, and arrayed themselves in a semicircular formation. Preston shouted at the crowd, estimated to number between three and four hundred, to disperse." (Wikipedia) Bostonians tried to provoke bloodshed by yelling threats and throwing frozen snow balls at the troops. They exaserbated the situation by yelling “fire” at the armed troops. One of the soldiers, Private Hugh Montgomery, was struck in the head and fell to the ground. "He rose and, without uttering a word, cocked his musket and fired.” (The Real History of the American Revolution, Alan Axelrod) The remaining soldiers panicked and fired into the crowd because they mistakenly thought the  order “fire” came from Captain Preston.  Captain Preston maintained his composure through the ordeal and never gave the order to fire. "Three American- rope maker Samuel Gray, mariner James Caldwell, and Crispus Attucks-die instantly. Samuel Maverick, an apprentice ivory turner of seventeen, was struck by a ricocheting musket ball at the back of the crowd, and died a few hours later, in the early morning of the next day. An Irish Immigrant, Patrick Carr , died two weeks later." (Wikipedia) Samuel Adams prompted  Paul Revere to create this image as a catalyst to build support in Boston for a potential revolt. It failed to solidify when his cousin John Adams volunteered to defend Captain Preston and six of his Majesty's men. Adams ensured that proper justice was served because their lives were being threatened by a mob.  John Adams was able to prove this in court and acquit Preston along with four of his men. The remaining two were found guilty of a lesser crime, received a branding on their hand and were discharged from the military. "The last thing that John Adams wanted to see among a people aspiring to become citizens of a free country was mob justice.” (page 61, The Real History Of The American Revolution, Alan Axelrod.) 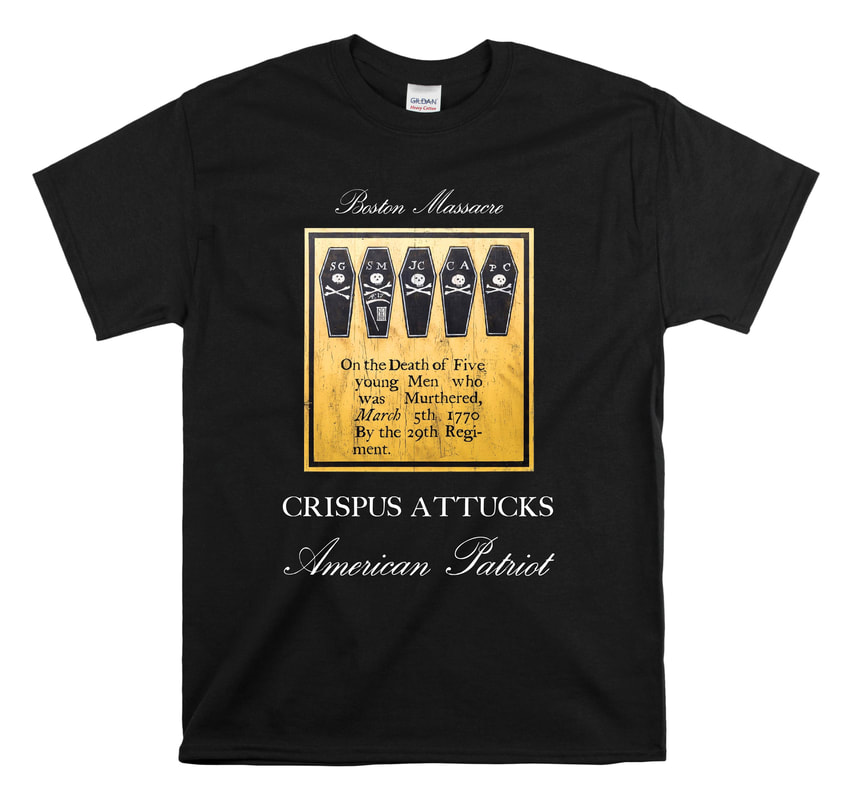